OK, a quiz for you. What can make an economist drop his/her strict working assumption that a firm is always to maximize profit?

Here is the answer: coffee. A very good coffee can make the undercover economist gives up such assumption. He wrote:

Except for my favourite coffee shop, the Monmouth in Covent Garden. They are short of space, and will charge mark-up for a large cappucino if you drink it in the shop. However they charge less for take-out coffee, and it comes in only one size. I have decided thy are far too nice to try to make profits

I share his opinion on favourite coffee shop. It's probably the best place for coffee. And for that Harford's book --I just got a copy of it three days ago--, that's a good read too. A delicious Econ 101, for you all. He tells you some very basic but commonly misunderstood concepts such as scarcity power, externalities, or comparative advantage in an accessible daily language. No, not that full-blown math. Recommended

Email ThisBlogThis!Share to TwitterShare to FacebookShare to Pinterest
Labels: Manager

From the Charles RIver

As Aco said, I am mostly away from the blogworld, taking a walk along the Charles River. The river marks the boundary for Boston and Cambridge, as well as the Essex and Middlesex counties of Massachusetts. It's spring time, so the pathway is just too beautiful to miss. 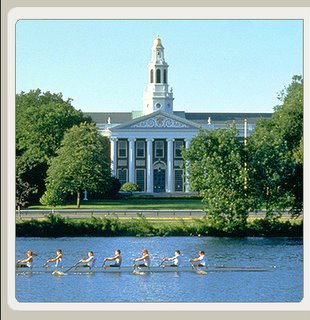 Everytime I walk along the river from my apartment to school, I always stare enviously at the big, luxurious complex of the Harvard Business School (HBS). While the main campus is in the Cambridge side, HBS - and the stadium - is located in the other side. It's a world in its own. We on the other side of the river often call it, sarcastically but enviously, the 'Allston Country Club,' after the neighborhood of Allston. 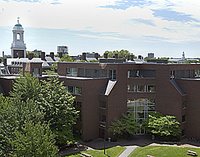 My Kennedy School of Government (KSG) campus lies just across the river on the Cambridge side. The other Harvard schools and the main Yard is another 5-10 minute walk. It's also a nice place, but nothing compares to the other side of the river in terms of size and luxury. As we often jokingly said, this is how the public (government) sector compares with the private (business) one.

Speaking of private vs. public sector, students of both school run an annual debating contest between them. The usual theme is "which school produces the real leader?" Or, in a more general term - which one is the real agent of change: business or public sector?

As you know, the U.S. had had great political leaders like Jefferson, Franklin, Maddision, Washington, or Lincoln and Kennedy. But the country was also shaped by businessmen and enterpreneurs like Carnegie, Mellon, Rockefeller, and Bill Gates in the modern world. Of course, each side has its dark side. Enron was just an example of business sector corruption. Or the 1930's great depression showed how (financial) market failure can lead to a global disaster. On the other hand, Nixon's watergate provides a high-profile example of public sector corruption. And we can cite so many examples on how government failure caused greater problems than the market failure (what do you think of the 'aid failure,' Prof. Sachs?).

You can read my note on last year's debate here. This year's debate was not that different with the previous one, so the note is still update.

So, which school provides the true agents of change? The thing is, 70% of HBS graduates work in the consulting firm. They don't really become enterpreneurs - the real private sector agents of change. Most of the KSG graduates still work in the 'public' sector (in a broad term), and some of them go. But still a great portion goes into the private sector, competing with the HBS fellows in the same job market. So I guess, in the end, they are even...

Everybody seems busy. That's good. But don't worry, your hosts are not forgetting the Café. It's just they are too "tied up" right now. They have life, too!

Rizal is probably reading philosophy in the land of Hayek now. Aco is en route to Angkor Wat. Ape is walking by Charles River, torn between Sachs and Easterly. Ujang can't wait to play soccer again while Sjamsu is obviously still playing guitar.

Let's do some bossanova this week. That means something Getz, or something Gilberto. Well, let's be total. From their masterpiece, Getz/Gilberto: 1) The Girl from Ipanema, 2) O Grande Amor, and 3) Corvovado.

I managed to attend William Easterly's talk at KSG. Although it was not the formal title of his session, he mostly talkes about his new book (a.k.a. "Why Jeffrey Sachs was wrong"). His arguments centered on several things:
However, having listened to Easterly talking with his soft and monotonic voice, compared with Sachs' eloquence and passion, I know why more people listens to Sachs. And Sachs has also been two-three step ahead with his clear (correct is another thing) plans and agenda.

Plus, the Bono and Angelina Jolie factor, of course. (Well, Easterly said he may consider asking Jennifer Anniston to team up...).

Email ThisBlogThis!Share to TwitterShare to FacebookShare to Pinterest
Labels: Manager

Sex in the Cafe

So you think the discussion on sex can only be written in Playboy Indonesia edition --which is very tamed--, but not in the National Bureau of Economic Research's working paper? Wrong.

Look at this abstract:

"This paper studies the links between income, sexual behavior and reported happiness. It uses recent data on a random sample of 16,000 adult Americans. The paper finds that sexual activity enters strongly positively in happiness equations. Greater income does not buy more sex, nor more sexual partners. The typical American has sexual intercourse 2-3 times a month. Married people have more sex than those who are single, divorced, widowed or separated. Sexual activity appears to have greater effects on the happiness of highly educated people than those with low levels of education. The happiness-maximizing number of sexual partners in the previous year is calculated to be 1. Highly educated females tend to have fewer sexual partners. Homosexuality has no statistically significant effect on happiness. Our conclusions are based on pooled cross-section equations in which it is not possible to correct for the endogeneity of sexual activity. The statistical results should be treated cautiously"

Let me repeat some of their findings, and my (unreliable) interpretation is in italics:
#1. money can't buy sex --nor love--
#2. sex is happier for educated persons --good reason for going to school, kids--
#3. highly educated females are more conservative --or, err, picky? why ladies, why?--:
#4. and happiness-maximizing number of sexual partner is one, yes one -- a case against polygamy, perhaps.

Moral of the story, economics can help you to deconstruct myths.

p/s: this is the slight modification of my old post; and aims to be a sequel of previous discussions on raunch and polygamy.

We're going to listen to the entire Miles Davis' Bitches Brew. So, be ready for the mystical trumpet of the master. And don't get lost in the piano battle between Joe Zawinul and Chick Corea (and of course Larry Young in Pharaoh's Dance) or drum war between Lenny White (so, yes, a little R&B) and Jack DeJohnette. (In case you buy them at iTunes, you'd lose the very important booklet that includes Ralph J. Gleason's liner: "Music is the greatest of the arts... it cuts through everything, needs no aids...")

Why this volume? I don't know... Maybe because I just read this Kompas feature on Nial Djuliarso. That guy is really something. But, as the article says, his producer chose a "middle way", meaning a "light, easy listening jazz" to "serve the (Indonesian) market demand". Yes, what people here usually mean by "jazz" is something like Dave Koz or Kenny G. Poor Nial...

Or maybe we can ask Nial to play here at the Café? No need to listen to "what market wants". As my econ guys here like to tell me, "supply creates its own demand". I don't know what that means, but I am now writing a composition: "Screw the Market". At least, when there's a need for compromizing, the kind of Miles' fusion is the way to go: don't give up the core.
Posted by Kate at 4/09/2006 08:31:00 AM 2 comments:

My first op-ed article in 2006 (the Indonesian version was also published by Kompas). Thanks to Jusuf Kalla for his remark. Because of the limited space, I had to drop some interesting issues:

1. Jagdish Bhagwati's rebuttal to Amartya Sen. According to Sen, famine never occured in democratic countries. But Bhagwati cited an example of an Indian state of Bihar, who had a famine problem in the 1980s although many other states had suprluses of rice production. The surplus state refused to transfer their surpluses, and the central government could not do anything. Finally, PM Indira Gandhi had to ask for help from Washington. This is on page 100-101 of "In Defense of Globalization" (2004).

How about a Marsalis week? Ladies and gentlemen, please welcome: Wynton and Branford Marsalis. But to make it even more interesting, let's have amalgam of jazz and classic. Think about Branford's collaboration with Orpheus Chamber Orchestra or Wynton with English Chamber Orchestra.