So it is happening again. In the middle East this time.

But let's first rewind the tape. Sometime in 2011 an amateur video was broadcast widely in Australia. It was about an "inhumane" practice of slaughtering cows in Indonesian abattoirs. Animal rights activists and Green Party jumped in, condemning Indonesian farmers and called for an action from Aussie government. And action they got. The government of Australia imposed a ban on live cattle exports to Indonesia.

Indonesia, on the other hand, took offence. The government said, fine, let's just then go ahead with our long time fetishism for self sufficiency in beef (I made up the sentence, but it was something to that effect, really). So, Indonesia cut import quota for live cattle from Australia by 30% in 2012 and another 30% in 2013. Not only battle, Indonesia also cut the import of beef, 60% in 2012 and 6% in 2013.

What's the consequence? Australian cattle growers were hurt badly, especially those in Darwin. They produce brahmin cows mostly for export to Indonesia. According to a friend who is expert in this thing, Australians don't really like brahmin beef. So export ban gave a big punch to the business. I heard they even had to kill many cows for nothing.

As for Indonesian side, we heard the self sufficiency rhetorics all over again. Rice, maize, soybean, sugar. And now beef. But then we also saw how the government panicked during the fasting month of 2013. Beef was in short supply, and the Eid day (the day when people eat a lot of beef, and I mean really a lot) was coming. The president was reportedly furious of the whole thing. Prices were going up very quickly. What happened next? Minister of Trade and Minister of Agriculture called imports from Australia. "Urgently wants to buy 25,000 extra cattle and 3,000 tons of frozen beef from Australia", so the news read.

Bottomline? Animal cruelty issue and trade war can be very mingled. Often time it ends up in a lose-lose situation for both trade parties involved.

So, this morning I heard this new news. This time it involves Australian sheep in Jordan.

Happy mudik, people.
This article in Kompas reports that the money involved in mudik is wasted for consumption only, rather than investment. As if consumption is bad and is not part of the economy. Come on. It is their own money. Let them decide what to do with them.
Posted by Aco at 8/06/2013 03:50:00 AM No comments:

On Protectionism #907 and other thing

It turns out that it is rather hard for many to see the relationship between restraining supply (such as import quota, or in general, protectionism) and higher price. If the argument for protectionism is to defend domestic producers, as long as they do not/can not  increase production, higher price is inevitable.

That's obvious, you may say. But how do you inform this obvious thing to general public discussion? On beef product, garlic and shallots, soy bean, ...and other in a long list of protected products.

The other thing I fail to comprehend is how come many expect administration benefited from protectionism measure (import quotas in particular) really care about productivity. Their immediate benefit is to make protectionism to last as long as possible -- and take productivity concern, if any, at the backseat. Why? Because it provides them with rents that can be handily cashed in -- and put them in bottled water card boxes, if you know what I mean.

Another crazy thing I read recently is that Depok local administration is going to levy foreigners 100 dollars per month. I can not find any other sensible (economic) rationale but blatant xenophobia and racism. What do you call a situation when you were an Indonesian working in, say Brooklyn or Jeddah, and the municipality decided to charge you 100 dollars per month only because you're a (legally residing) Indonesian?

And don't get me started with our draft of new school curriculum.

Beef price: what the .... were they thinking about?


Hi everyone. This is my first blog in this Café after 3 years

I rarely purchased weekly magazine until the current corruption scandal on beef import quota. Partly is because the case involves PKS party, a staunch promoter of government by faith (or something around that idea).

But as we all know, while faith is necessary for those wanting to pursue heaven, it may still require additional efforts to ensure sound principle of governance. The recent corruption case on beef import is self-evident that political interest overrode good faith and basic economics principles.

In front of cabinet members, the ministry of agriculture faithfully embarked in a series of jaw dropping maneuver promising self-sufficiency in beef by 2014.  This supposedly to be achieved through program to increase supply of domestic cattle industry and protecting it with limit on how much beef can be imported (quota). To back up the story, proponents of this program often refer to “cow census” and suggest that we should have faith that there are enough cows across Indonesian islands to satisfy consumers demand.

No doubt, promoting development of domestic cattle industry is a good idea. Local and small cattle breeders in Java and Sumatra can benefit from sound government program to improve their competitiveness. There are also few other locations in Indonesia that are suitable for large scale private cattle ranch industries, providing there are adequate ports and ships to transport them to consumers around the country.


But the outcome of self-sufficiency in beef was sealed when import quota was drastically reduced in mid 2012 (instead of keeping the rate of increase constant).


Indeed, the “cow census” might have misled the government to think that there is enough cows for consumption. The fact is that not all cows are available for immediate slaughter, some households use cows as savings for their rainy days. The national consumption figure for beef, which is likely derived from Susenas, is also likely underestimated because it does not capture beef consumed outside the house (i.e., buying bakso, eating rendang, sate Padang, etc.)

What is happening represents a very basic economic principle: in the absence of import, domestic cow industry will never produce beef at the quantity where supply equals to consumers demand. Instead, they will produce beef at the quantity where marginal cost of slaughtering the last cow equals to marginal revenue from selling it to consumers (in slightly technical jargon: MC = MR) and set equilibrium domestic price of beef higher than price level where more import were allowed.

Media commentators can blame importers or domestic cow industry for allegedly forming cartels to influence price. Although this may not be ruled out, the fact remains that there is little or no incentive for a rational domestic cow breeder or slaughter house to supply consumers beef at competitive quantity and price levels As simple as that. 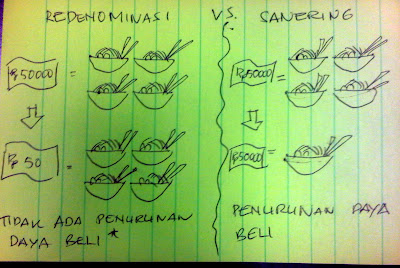 Dear Kate,
What's "blusukan"? Any economics on it?
Struggling Indonesianist
Dear Strugling Indonesianist,
Apparently you've been trying hard to read Indonesian news. I know it's fun, right? Here's a secret to learn the language quickly: just read the news over and over again, check the ones with pictures, forget dictionary or thesaurus. You'll get the feel eventually.
But lemme try. Blusukan perhaps means an impromptu visit by a top official to his/her subordinates - or as the media put it, to the people. It's done in order to get information from the grass root first hand, maybe. It can also be seen as an act of caring. When else a governor or a president pay a friendly visit to the poor? Empathy is the keyword.
But "impromptu" might not be a correct term. I would think any visit by a governor or a president would involve lots of preparation and security procedures. Some streets should be closed, alleys cleared. Some media get invited with special access to the site - but for regular cars, motorcycles, pedestrians, it's probably a detour. So, with all due respect, the economic impact for street sellers having to postpone their business a couple of hours might be negative. Let alone the extra time needed by motorists to deal with the additional traffic jam. It's great to meet with our leader occasionally. But probably you don't want it all too often.
Best,
Kate
Posted by Kate at 1/05/2013 08:07:00 AM 2 comments:

An MP from PKS urges the government to stop the declining prices of crude palm oil and rubber (link here*). He points out, rightly, that the reason why prices are going down is because the demand is low due to the still weak global economy.

His solution is to get together with the other producers to form a collusive cartel so as to limit the supply and apply a monopolistic power.
But as he said, the problem is on demand. Limiting the supply might increase the price momentarily (or halt the decline), but as long as the purchasing power of the buyers is weak, that would not help.
His second solution is to force domestic consumption. Sounds like another call for the mighty Bulog?
*) It has come to my attention (thanks to @sillysampi on Twitter) that many of my links to Kompas were gated. My apologies. I try to link to non-gated ones from now on (if available); otherwise, I'll mark it as "gated".
Posted by Aco at 1/05/2013 05:13:00 AM No comments:

It's not just on rice, soybean, sugar, corn, and meat. Apparently the self-sufficiency is coming to computer business too (links updated, now non-gated). Oh, maybe not totally. They expect Foxconn to come and serve domestic economy.

But the funniest comment comes from the quoted telecommunication expert. According to him, import restriction on cellphones, laptops, and tablets is necessary to block "low quality and consumer-harming" products from entering the country.