The Tale of Two Countries (in Three Pictures)


The demise of the North Korean dictator Kim Jong Il, in addition to generating endless internet memes and jokes, has prompted some to remind us about the devastation that his regime (and his father's) brought to the North Korean population. Among those reminders, the following three pictures can illustrate the grim legacy the best.

GDP
The first is the following GDP figure of North and South Korea between 1997 and 2003 that shows how massively different the neighboring countries performed in the period. Because yes, GDP is still one of the best summaries of a country's economic performance. (Source is here) 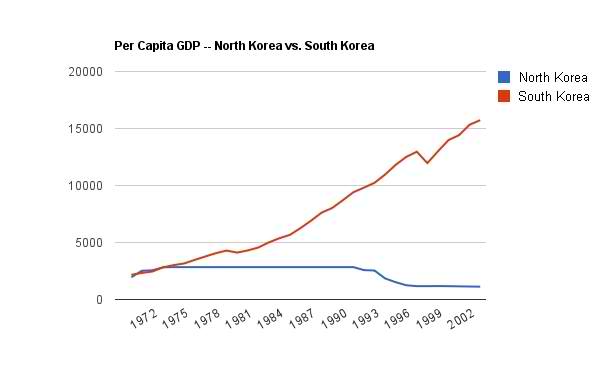 Night lights and economic vitality
The second one, my favorite, is this satellite image of the Korean peninsula at night time. South Korea is brimming with lights, evidence of vibrant economy, while North Korea is almost completely dark. (Source is here).  Why this is important? An economic study by Henderson, Storeygard, and Weil (2010) shows that satellite images of night lights provide a good proxy for measuring economic growth (here's the WSJ version) 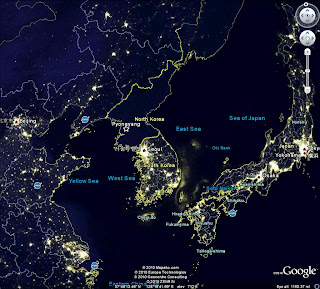 The biology
The third figure, while may not look as dramatic as any satellite image actually provides an even starker evidence of the failure of the centrally-planned economy. It is a graph also of a stagnated growth, not of the economy, but of the human population. (Source is here). 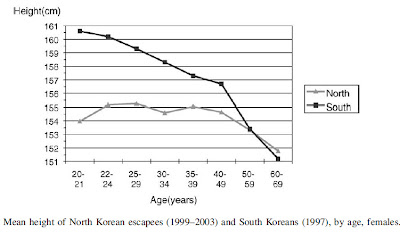 The above graph is from a  2004 study by Sunyoun Pak who looks at data on height of adults and children of the neighboring countries. Pioneered by Nobel prize winner Robert Fogel, in the last 3 decades, economists have looked at the relationship between income and health. Among a number of biomarkers, height has proven to be one of the best and most useful indicator of long-term health and well being.

It goes without saying that one could not conduct a typical household survey in North Korea, so the author uses data from North Koreans who escaped to the south between 1999 and 2003. Anthropometric measures were taken of the escapees and compared to those of South Korean population (the author noted that the escapees may be from lower socio-economic background relative of the North Korea society).

The graph clearly shows the difference in heights between the two groups and the difference is larger the younger the cohort. On average, South Korean young adults are 6 cm taller than their Northern counterparts. The author goes as far as to conclude: “In contrast to population of South Korea, as well as to that most of the rest of the world, North Koreans did not experience an increase in physical stature during the second half of the 20th century.”

There you have it.  Two countries sharing similar geography, climate, ethnicity, but different political and economic system, and massively different outcomes.

... and a bonus for my fellow Atlantic Monthly reader(s):
The Atlantic's photo essay from earlier this year, "Inside North Korea". Which one is your favorite?

Updates (2/25/2014):
This image and the commentary  from NASA Earth Observatory website have been making rounds. The satellite image taken on Jan 30, 2014 shows an even starker contrast than the one we had in this blog post. Most notably the city lights around Shenyang show how much the Chinese's northeast of commerce and transportation hub has grown in recent years.

The NASA commentary also offers a mindboggling fact behind the image: the per capita power consumption in South Korea is 10,162 kilowatt hours, compared to 739 kilowatt hours in North Korea.