I want to know, using the method that I know --in case you don't know, it's economics--, why there seems to be a rise in urban Islam fundamentalism after the crisis in Indonesia, that at times sparks social violence. And I come across two papers of this very interesting, yet under-appreciated, economist, Daniel Chen of Harvard.

Empirically, I demonstrate economic distress stimulates religious intensity by exploiting the fact that rapid inflation caused relative prices to favor growers of staples, namely rice, and hurt sticky wage-earners, particularly government employees, whose salaries are set by federal law. I find that households experiencing a $1 decline in monthly per-capita nonfood expenditures are 2% more likely to increase Koran study and 1% more likely to switch a child to Islamic school. Moreover, participation in other social activities did not increase while labor supply increased, which seems inconsistent with an opportunity cost view of religious intensity.

Instead, using a difference-in-differences strategy, I show that households that increased Pengajian during the crisis have less unmet demand for alms and credit for meeting basic daily needs in the following time period. The effect of economic distress on religious intensity essentially disappears in places where credit is available. And religious institutions appear to facilitate consumption smoothing among villagers, suggesting religious intensity functions as ex-post social insurance.

These two papers are worth to read completely (skip the math, if you want). And by the way, back to my initial question, on why it is more urban than rural extremism that we observed lately, the first sentence of the first quote partly tells it: economics distress hit the sticky wage earners, the urban feature, more severely.

We know that:
a. The world rice prices hit the $1,000-a-tonne level for the first time
b. Indonesia’s rice production is estimated to be about 2m tonnes higher than consumption this year thanks to improving yields and an increase in the harvested area.

What can you infer?
Yes, sell the surplus and reap the windfall profit. I heard you said you always want to help rice farmers.

But the rice consumers might suffer, so, you said, we restrict export to tame the inflation. Why didn't you tell me the same story when domestic rice price is high and we wanted to import, but you said no? Let us be consistent, if the poor --and only the poor-- could not afford rice, provide them with the direct money subsidy. Let the middle and high incomes pay the market rate.

You know what, you can not talk about agriculture revitalization --itself a long term plan--, while at the same time propose rice export restriction. After all, you want to sell the agriculture output as many as possible at the price as high as possible, no?
Posted by Rizal at 4/23/2008 12:12:00 AM 11 comments:

I oppose the idea of across the board subsidy for higher education students, but I am for special plan to help students from poor family to pursue their education in (good and usually not inexpensive) university.

According to this piece in NYT, some US top universities have started to install such program lately. For instance:

North Carolina was going to cover nearly the full cost of any student whose family made less than 150 percent of the poverty level or, for a family of four, about $30,000 in today’s dollars. Students would still have to work 10 to 12 hours a week in a campus job, but they would not have to take out any loans.

The financial-aid bidding war at the nation’s top universities was under way.

I like the North Carolina type plan, since that's not just a free lunch, and I imagine, say, FEUI announces that starting next academic year enrolled students from lower income family would get zero tuition fee but have to work as library staffs, administrative clerks, labs attendants, and maybe janitors and gardeners. The university can save some money cost, too.

And then having known this, other universities will follow up with more generous scheme --say not only no tuition fee, but also to cover some part of student's living cost.

It has become a norm here in Indonesia that when a member of a family gets married the family puts this notice (or any of its variations) on the invitation card: "With all due respect we prefer not to receive flowers or other parcels, thank you". Which actually means: "Please just give us money". Economically, this practice is welfare-improving. Because its the newly-weds who know exactly what they want, not the gift givers. To save them time for exchanging some unneeded stuff, money is good.

But for the family of a state official, there is a constraint. The rule says, any government official is not allowed to receive graft or gifts worth more than Rp 1 million. And even in their wedding parties, the mighty KPK (corruption eradication commission) presents to examine the gifts.

So, I imagine, if these practices (along with the rule and KPK's method of checking) prevails, family (started by state officials') will have another notice on the invitation card, saying:

Carrot and stick -- use them properly

So there was news about this nine year old boy who was grounded but managed to escape and disappear with his father's thousands of dollar bills. Later, he changed some of those dollars into rupiah at a money changer and bought a hand phone and an MP3 player. He also paid a mall security officer to 'escort' him.

Then he was found and brought back home. He was shown on television smiling. The parents were there too, all smiling and affectionate. A friend of mine couldn't take it. "How come the parents look so loving to that little rascal? He stole their money for god's sakes!"

I said, "Of course they look so happy. They should. Their boy is a genius". The friend disagreed, "But he's still a thief". So I responded, "True, he stole that money. So if I were the parents, I would have punished him hard for stealing... but on account of being smart, I would have given him ... gift -- maybe more money".

In defense of false ads

There have been numerous complaints by cellphone users about misleading advertisements. Service providers are racing to attract consumers in a Bertrand price war, using advertisements as attractor. Some ads are extremely dumb.

Should the government take any action on this?

No. Banning false advertising only reflects the belief that the average people, consumer, is stupid. It is as if, as Stigler said, individual consumer can in no way detect fraudulent claims and promises. So he has to be protected from his own incompetence. That's nonsense.
Posted by Aco at 4/09/2008 04:03:00 PM 15 comments:

Email ThisBlogThis!Share to TwitterShare to FacebookShare to Pinterest
Labels: Freedom 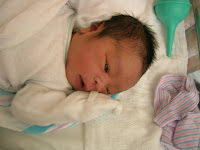 The Café welcomes its newest member: Lintar Angestu Wijanarko Shidiq. Congratulations to Rizal and Sisilia in Washington, D.C. Here's Lintar's picture. Aco told me he asked Rizal, "Dude, why didn't you tell me?". And Rizal responded, "Been busy at the hospital, Mate. Lintar's bilirubin was rather high; but he's now fine and sleeping -- after I read him some micro foundation of Keynesian economics".
Posted by Kate at 4/07/2008 10:26:00 AM 10 comments:

Which Rice Price is Which

Some months ago, when the domestic rice price was high --due to shortage--, and the international price low, we didn't want to import because, some said, it would hurt the rice farmers, eventhough when majority net consumers would love to have lower imported rice price.

Now, when the domestic price is low --due to harvest season--, and the international price high, we don't want to export because, some says, it would be good to have large domestic reserve to protect the rice consumers, eventhough at the cost of, well, the rice farmers who may gain for that high international price.

So which one is which --defending the rice farmers or consumers? I am scratching my head.

Meanwhile, if BPS said that in January 2008, in 11 regions the farmer's term of trade increases while the other 11 otherwise, but nationally it goes up by 0.04 percent, can we say that the farmer's purchasing power decline, as that headline's subtitle suggest? Note, too, it was on January when the harvest didn't come yet.

On why the rice price persists high despite harvest time, it's the demand-supply mechanism. The article itself says that the demand increases significantly in Batam, Bangka, Pontianak, and Pekanbaru. Can you guess why? Yes, because international price and demand is high, exporting rice is profitable, and in those area, it is likely easier to sell the rice out. The law of one price, the economist friend would tell you.

If you really want to help rice farmers, what you should do is not to pile up national reserves, but get them more access to international market to outdo the middlemen that you keep blaming on the disparity between consumer and producer rice price. Or in other words, make the rice middlemen services market competitive and let the rice farmers enjoy the high international rice --if you really want to defend them, of course.