I don't really recall it, maybe sometime in the late 1990s, that my co-barista here, AP, bragged about showed me a book he just read: The Economics of Life. It took me another few years to get my own copy while visiting another co-barista, Aco, in Urbana-Champaign, and that's my first introduction to the work of Gary Becker.

And, believe it or not, it was not a smooth sailing. Partly because I was still persuaded by some leftists ideals, partly because I was not familiar to the first world problems discussed in the book (such as baseball), and partly, probably the most important reason, because I still did not really get what economics is all about.

Until I read The Economic Approach to Human Behavior (1976). 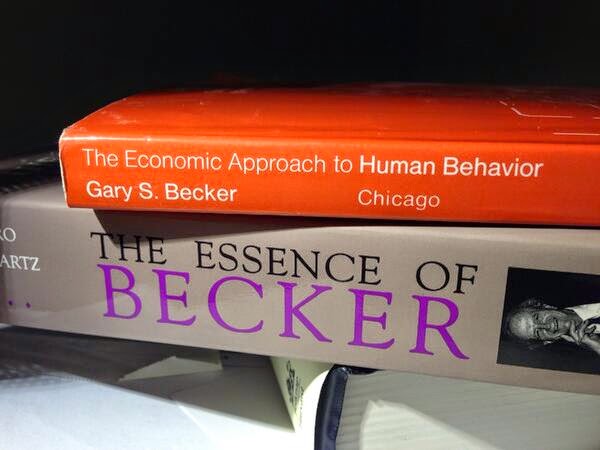 Eleven pages Introduction of the book is really an eye-opener to me, who had been doing economics for some time without being fully aware of the methodological very basis of the discipline: maximizing behavior, market equilibrium, and stable preference.

Then I took a course on Economics of Non-Market Behavior taught by one of Becker's favorite students, Larry Iannaccone. There, I read lots of Becker's work and learned to develop intuitions to see any human behavior or social patterns using economic approach i.e price theory. For a class assignment, I remember trying to propose topic on why people believed in rainmaker (i.e shamanism) and a classmate pondered why many New Yorkers love dogs.

Reading Beckerian economics feels like that you're given a lightsaber to deal with various social issues. Not everybody on the other side will be happy with that, but it's a powerful tool nonetheless. It also helps you a lot to be a well-reasoned social commentator. Although not necessarily makes you the most popular person in a cocktail party, it helps you to actually take side on things (read: policy issues) consistently. Personally, it really provides me with a solid framework to discern seemingly messy and complex social issue and human behavior.

Now, to bring it closer to home, too often our economists and/or economic commentators in the country too easily depart from economic approach in their analysis -- if they ever held it once. It might just show a sign of intellectual laziness or simply ignorance for basic tenets of economics, namely basic price theory derived from three axioms above. But either way, it's a pity. What else we can expect most from a person trained in economics if not an economic analysis?

Instead, oftentimes what we see is an economic analysis that never was. Following Beckerian revolution (some say imperialism), it is inevitable that economist discusses social issues. But it is of little use if she/he does it without applying his/her economic approach and, god forbid, resorts to normative analysis. Becker himself, after laid down his economic approach, carried on to demonstrate how to do it on issues such as crime, addiction, fertility, discrimination, etc.

I often get impressions that these "economists", after presumably going through those curves and math in the classrooms, do not seem to get that "...economics is not a field of inquiry, but rather a method of analysis..". Their comments on various social issues reflect very little, if any, their educational background.

Even worse many of them trade their hard-earned economic tools and skills for populism.

This may indicate a deeper problem: our economics education failed to equip students with the lingua franca of the profession. No, it is not the math (although that is, too), but the language of basic price theory and the economics of incentives (Heckman, 2011). As a result, first, we can not communicate clearly with economists at the frontier of the field and/or follow large bodies of latest development in the profession. Second, in communicating with non-economist, we do not sound like an economist.