On the Tasteless Garuda Billboard 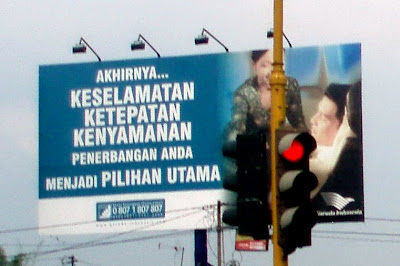 When my relatives came to visit us in Yogya about two weeks ago, one of them saw the billboard above, towering over the intersection between Jl. Kaliurang and the northern ring road, and he said: "Wow, that's such a bad taste, unethical to say the least". The ad says,

Yes, it's a Garuda ad, and the billboard first went up not long after Adam Air KI 574 went missing. Tasteless. Unethical. There is an illusion of safety with Garuda, and the airline doesn't shy away in exploiting it. Unspun may have commended Garuda's Emirsyah for doing a good job in the aftermath of the GA 200 accident, but someone should tell the president director about those ads his company been running since early this year.

Do people buy into it? I can say I did. I had to fly back and forth between Yogya and Jakarta in the past 4 months and since the KI 574 accident, I fly only with Garuda. The fact that Garuda could afford to run those ads without much of a backlash show that the illusion of safety is widely held.

Seeing the billboard, my other guest went as far as saying it's almost inevitable that the ad will backfire in one way or another. It's a jinx, "pamali", "takabur". Well, I was never into superstitions - I am more concerned with the conditions of the runway at Adisutjipto - short and bumpy.

I agree with Rizal that it is not the time to play the blame game, and I certainly wouldn't blame recent airline disasters on competition. What we need is indeed a thorough audit not only on airlines but on the whole aviation infrastructure (see Roby's comment here).