Take a look at these charts: 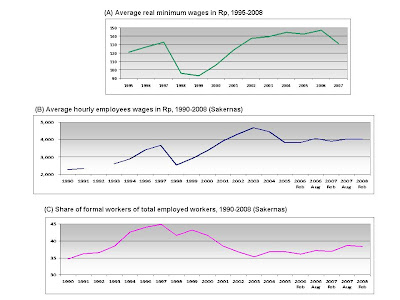 Here's how I read them. First, (A) and (B) show a strong association between real minimum wages and overall (average) employee wages. The relation was most obvious between 1999-2003. This shows that minimum wage has become an arena of collective bargaining. Wage negotiation happens not in the private sphere (within company) but in the public sphere (policy). This indicates an institutional failure in the labor market: bipartite negotiation. Since 2003, real minimum wage has been relatively stagnant, so has the overall wages.

Note: 1) you won't see the relations as significant if you just simply take one point of time and compare it to another (say, 1999 vs. 2008). 2) a colleague of mine did an econometric estimation and confirmed that every 10% increase in average regional minimum wages is associated with 1 percentage point decline in the share of formal sector employment a year later.

Third, I didn't put it on the picture -- but apparently there is an obvious relations between wages and unemployment. Our friend Suahasil Nazara and his co-author Iyanatul Islam might be right (like Card and Krueger). But I second Prof. Aris Ananta that unemployment rate may not be the best labor market indicator, as it doesn't tell much about job quality and welfare. In such case, formal sector employment should be a better indicator.